On the regular races page are listed several companies that organise regular events around the city.

Here’s a list of races that are held annually and are mostly on closed roads in Central London. These are big races that give you a unique London experience.

There are a lot of other half marathons and 10ks in and around London, but they often cover the same routes particularly the River Thames around Kingston, Richmond and Hampton or the Queen Elizabeth Olympic Park and are on open roads on footpaths and pavements/sidewalks. These routes can be enjoyed at any other time and no cost, so have not been included here.

I’ve run the majority of these races and have provided links to any races I’ve reviewed. 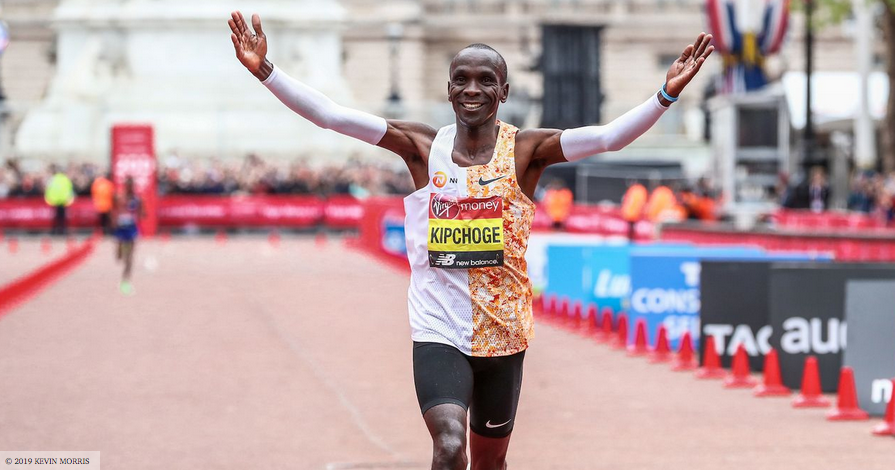 The event that needs little introduction and dominates the UK running calendar. It’s not the first, biggest or fastest marathon, but it’s the best. One of the six marathon majors, it truly is a bucket list race. It seems to get tougher and tougher to get in via the ballot, but there are other routes – Good for Age and charity places. The route is lined with spectators from the first mile to the last where it can be 4-5 people deep around the Embankment and Westminster. It’s worth going to watch as a spectator, to experience the buzz. Personally, it’s my favourite day of the year as London has a smile on its face and everyone talks at one another.

Where: Greenwich to Westminster

The choice of a 10km, half marathon or marathon over a weekend in a lovely part of south-west London. All races begin in the beautiful Kew Gardens (a world heritage site) with the half and marathon finishing with a festival in Old Deer Park having followed the River Thames. Great organisation, t-shirts, medals and a flat course, but also free entry to Kew Gardens for the day (Adult price £13.50) for you and your family. There is also a 5km, kids mile and family mile across the weekend.

See my review of the Kew Gardens 10km here.

Where: Kew Gardens and Richmond

Bacchus Marathon and Half Marathon

A marathon in a vineyard which can mean only one thing. Wine at the drinks stations!

This is slightly out of London, but a unique experience. You can sample six fabulous English wines, at five drinks stations along the course with two wines served at the last station during the half, and double that in the marathon. These are small samples and not wines glasses. Food and soft drinks are also available. A beautiful setting in which most of the field choose fancy dress and a post-race hog roast where the party carries on long into the evening.

How Much: £50 for the marathon and half marathon.

As the name suggests, 13.1 miles on closed roads, and through four of London’s eight Royal Parks – Hyde Park, The Green Park, St James’s Park and Kensington Gardens. See the Four Parks and Mall page here. A very popular race that has to be entered via a ballot. There is a Food and Fitness Festival afterwards and a great chance to take in lots of the capital’s landmarks. 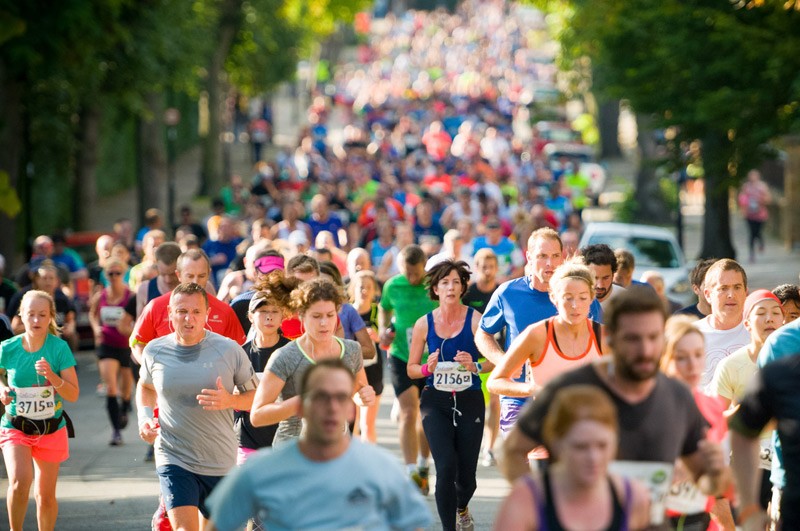 A popular closed road half marathon in West London that although a locally organised race, has that big race feel. A mix of elites and first-timers on a “challenging/hilly” course with great support in the leafy suburbs.

How Much: £ 38 to £50 depending on how early you book and affiliation to a running club. 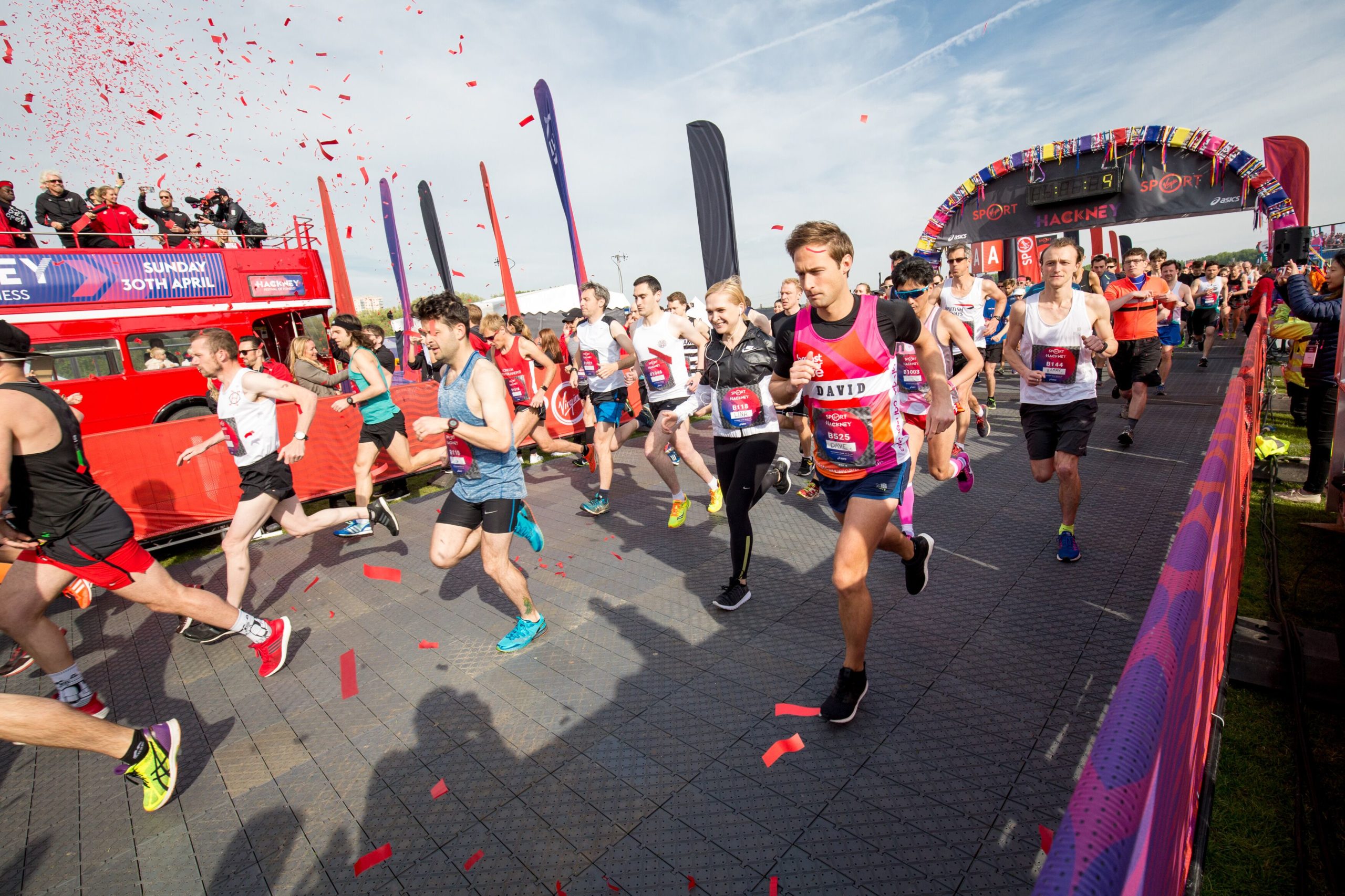 What started as a small community race has grown and now been taken over by Virgin Sport and is one of the largest races and running weekends in the London calendar. Starting and finishing on Hackney Marshes, the closed road route takes in the sites of trendy east London with the last few in the Olympic Park. A vibrant atmosphere takes in the area’s culture and the vibe of the East London running crews. 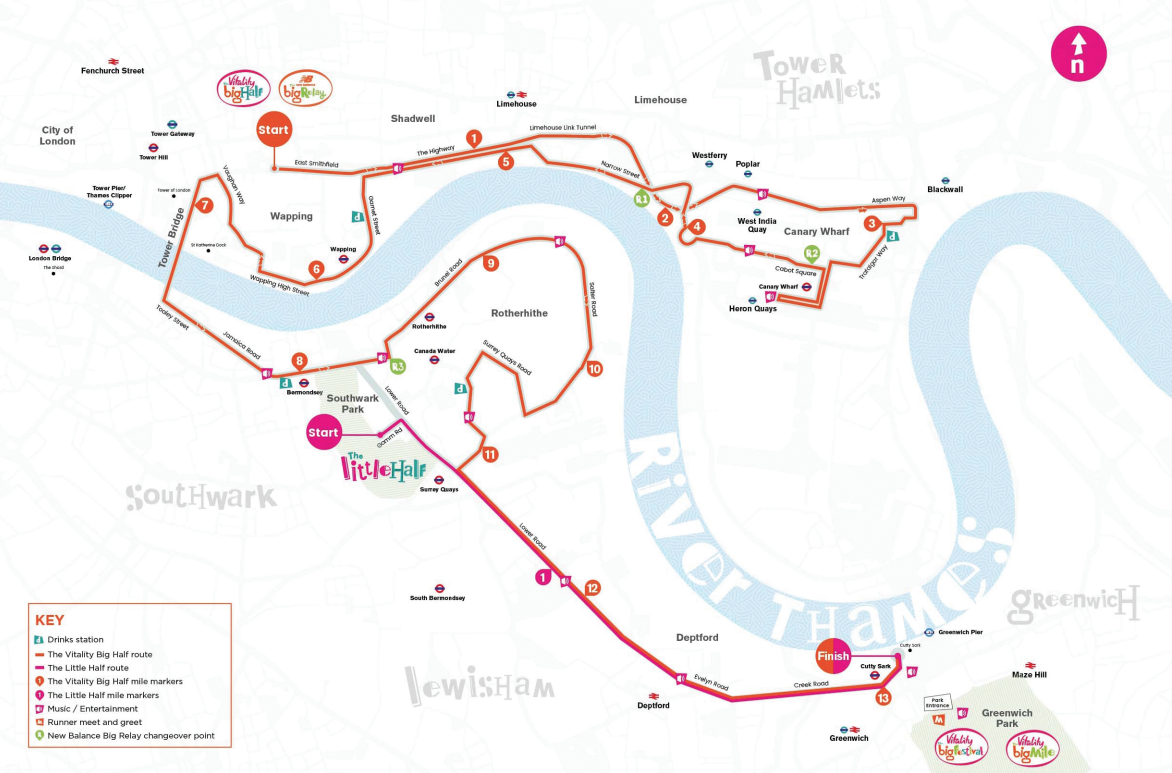 The little sibling to the London Marathon. Organised by the same people and following part of the marathon route, but in the other direction from the city to the Cutty Sark in Greenwich. A popular London Marathon warm-up race that misses some of the spectacles of the marathon route. There is also a 2.4-mile run, which finishes at the Cutty Sark, a free one-mile course, as well as a family-friendly festival of food, music and activities.

How Much: General entry places are £46.

The only half marathon that’s right in central London. The race starts on Pall Mall, finishes by Downing Street and has fabulous views of London’s most iconic landmarks including Big Ben, St Paul’s Cathedral, Nelson’s Column, the Gherkin, the Shard, the Tower of London and the London Eye. A new and very popular event for which entry is via ballot or a charity place.

How Much: General entry places are £55

This race has been around for nearly 20 years in various forms, names and sponsors and is now under the Virgin Sport umbrella. The closed road central London route goes down Regent Street, Pall Mall and the Strand. The highlight is the return section along and Embankment, with views across the river, the London Eye and Big Ben. An excellent summer London race.

A similar event to the London 10km. This one is based around St James Park and starts on The Mall and finishing on Birdcage Walk. There is no section along the river though. The team behind the London 10000 are the people behind the London Marathon so know a thing or two about organising big races. 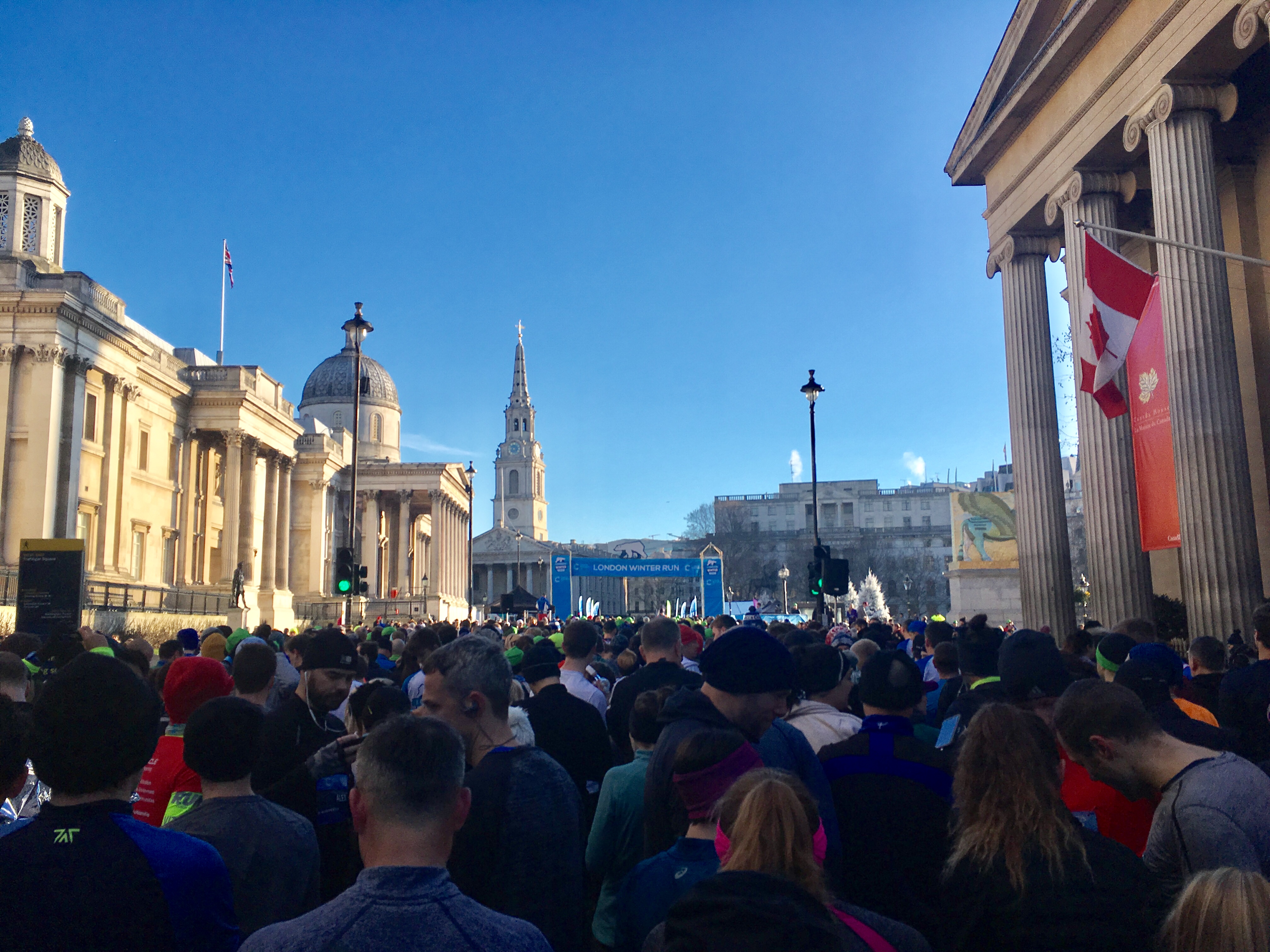 Again, similar to the two races above (London 10km and 10000) but run in February when it a little bit colder. 25,000 people start from Trafalgar Square and finish on Whitehall by Downing Street. This is the first big London race in the calendar with music, people dressed as penguins and polar bears and an Après Party. Wrap up warm!

Where: City of London 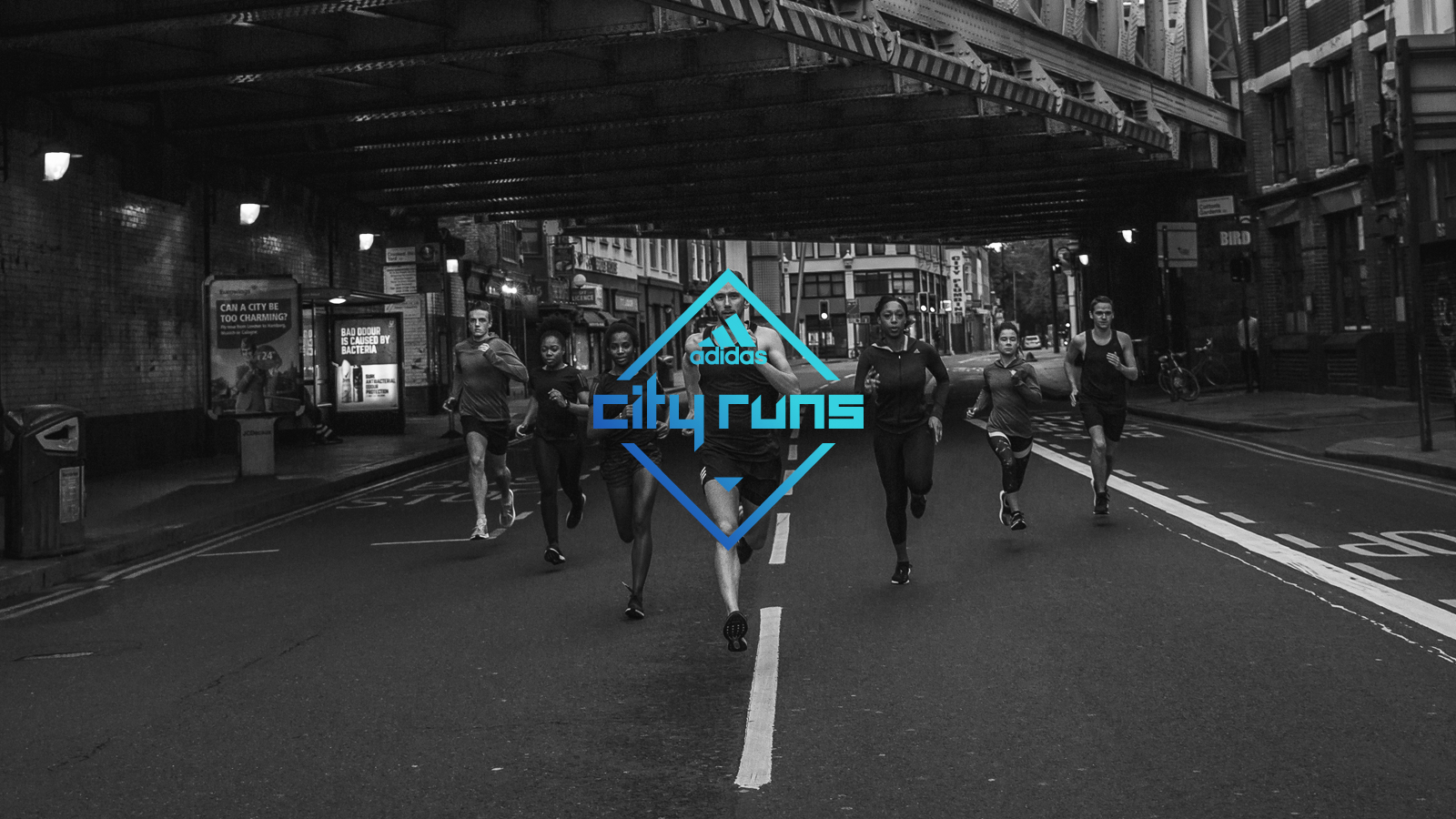 A young series of events that have proved popular with medal and t-shirt collectors. With two standard closed road 10km races in Fulham (West London) and Shoreditch (East London), the other is the 1-hour race. The challenge is to run as far as you can in one hour around a one-mile lap near St Paul’s Cathedral. All entrants wear the same t-shirt with their running number printed directly onto it.

See my review of the Shoreditch event here.

Where: Fulham, Shoreditch and City of London