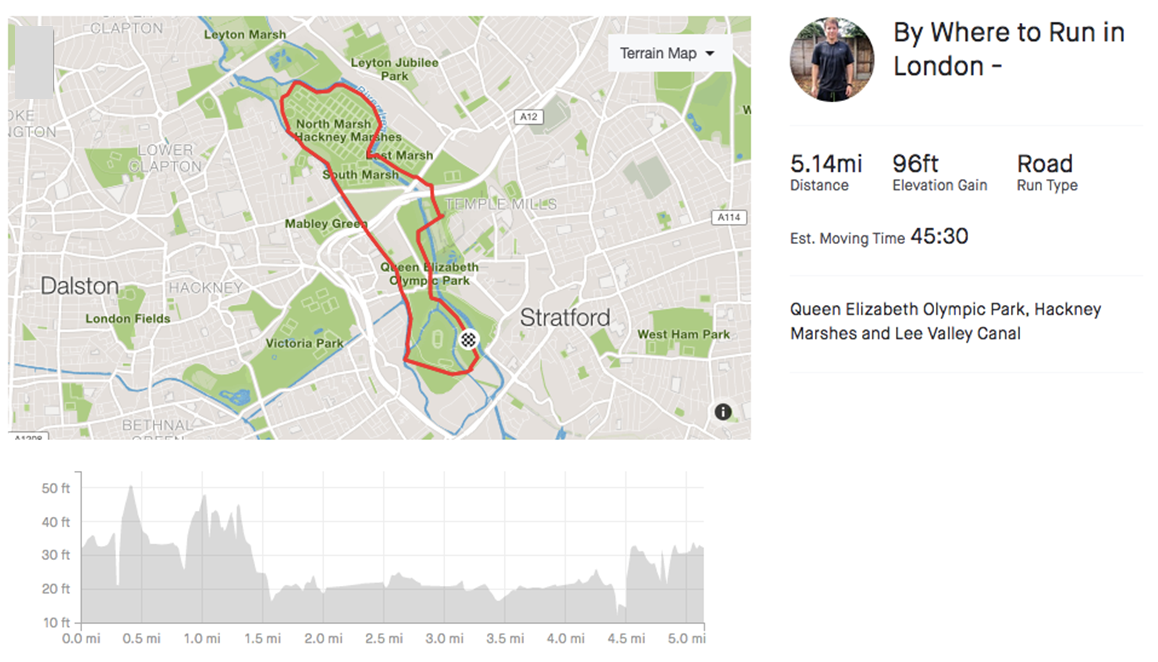 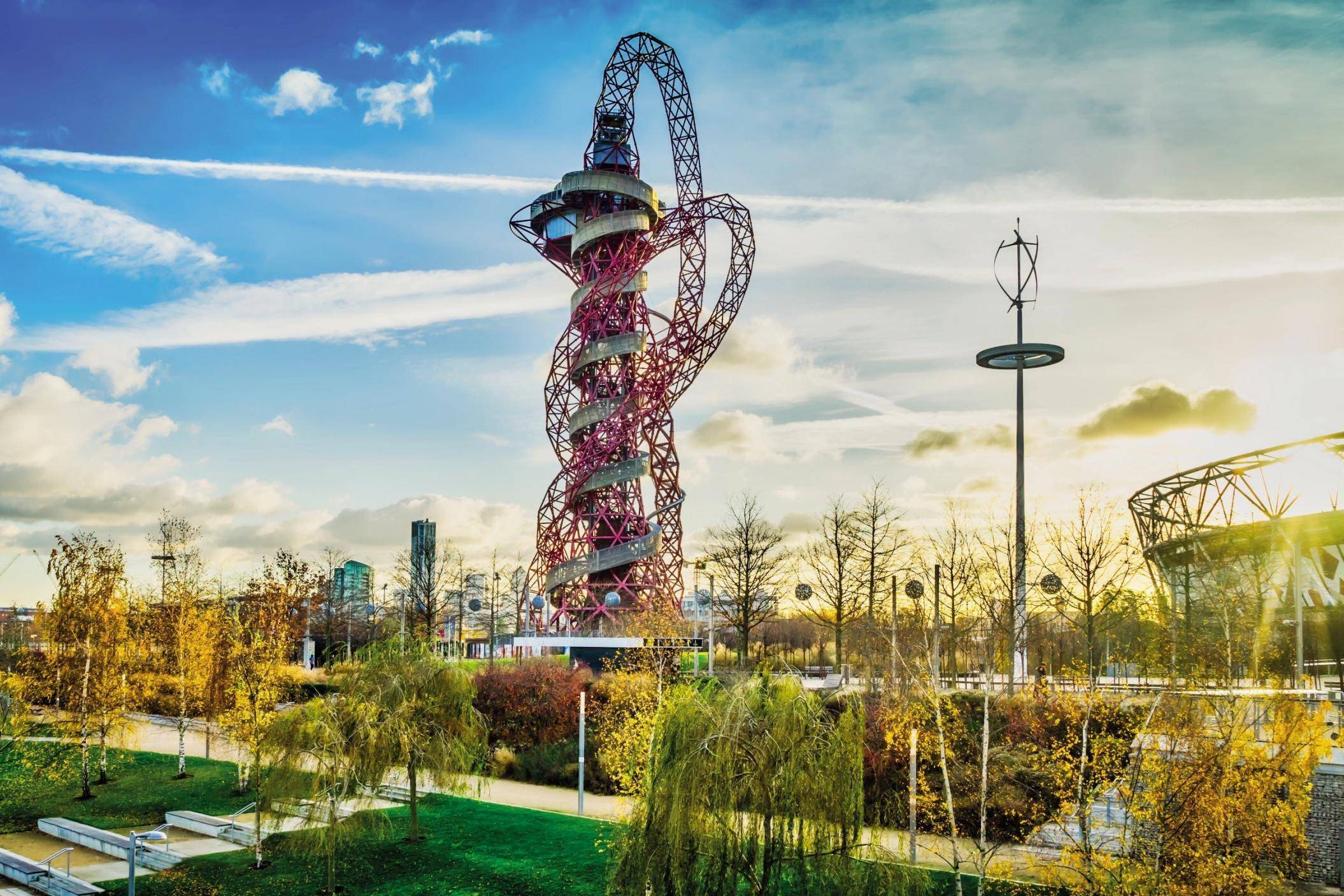 The redeveloped industrial area of East London transformed by the London 2012 Olympic Games. It contains the London Stadium, now home to West Ham United, the London Aquatics Centre and VeloPark all surrounded by parkland and waterways. 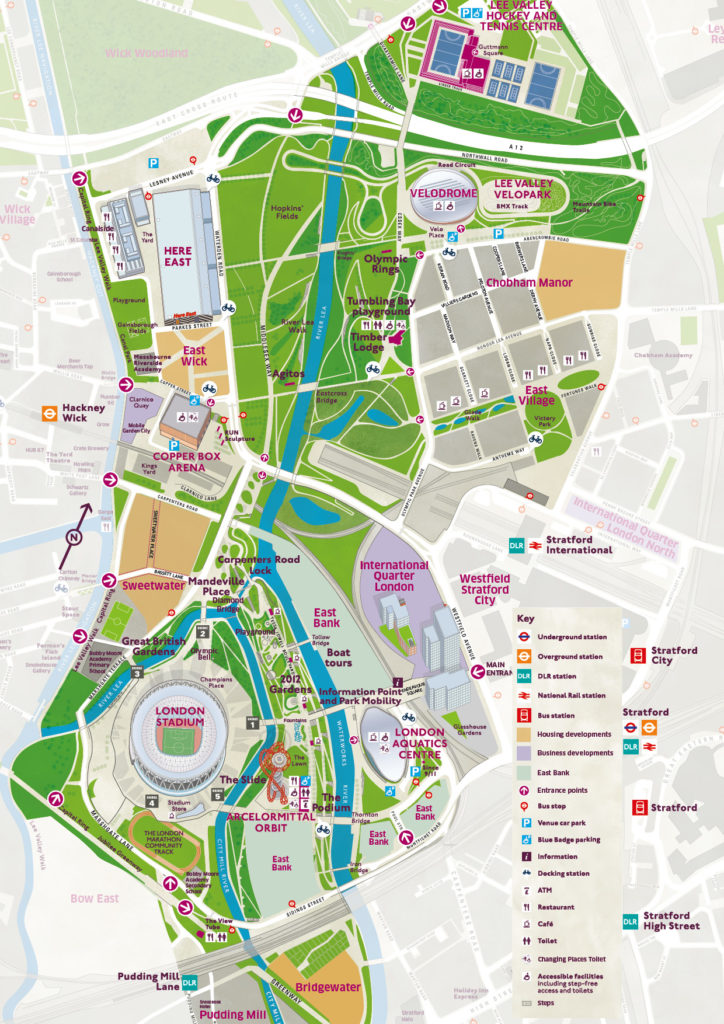 For ease of navigation, the route has started at the ArcelorMittal Orbit, the oddity of large-scale public art and legacy of the 2012 Olympics. In wondering what to do with it afterwards, they added a slide!

Head north from the Orbit and follow an anti-clockwise direction past the London Stadium and Copper Box arena, before closing the River Lea to the Velopark.

Pass under the road towards the Hockey and Tennis Centre and head left crossing the river again to Hackney Marshes.

Keep the river on your right and track the outskirts of the Marshes.

Loop around and head back along the canal towards the Olympic Park again with the River Lea/Lee Canal/Hackney Cut on your right.

Once you reach the London Stadium, circle back to the ArcelorMittal Orbit

The routes around the park have no opening and closing times. There are security cameras and areas are well lit. It’s recommended not to run this route alone when it’s dark for safety reasons.

The best option is to use public transport.

The Park has two main cafes. In the north of the Park by the Tumbling Bay playground, the Timber Lodge Café offers drinks, breakfast, brunch and lunch, and even a BBQ in spring and summer.

In the south of the Park, The Last Drop is by the base of the ArcelorMittal Orbit and serves coffee, cakes and pastries, light lunches and snacks.

There are cafes at London Aquatics Centre and Lee Valley VeloPark. The West Ham United Coffee Co is based in the Stadium Store

There are also free water fountain facilities by The Last Drop and Tumbling Bay Playground.

If you want to make a day of it or even go full triathlon model, as mentioned the park contains the spectacular London Aquatics Centre, designed by architect Zaha Hadid, and the Lee Valley VeloPark where you can do track cycling, road racing, BMX or mountain biking.

For the thrill-seeker, there is the previously mentioned ArcelorMittal Orbit, the 114.5-metre-high sculpture and observation tower and reportedly the world’s tallest and longest tunnel slide at 178 metres. It’s recommended to pre-book to go up the tower and have a go on the slide and save a bit of money. To go on the slide you have to be at least 1.3m and 8 years old or weigh under 130kg (22 stone)