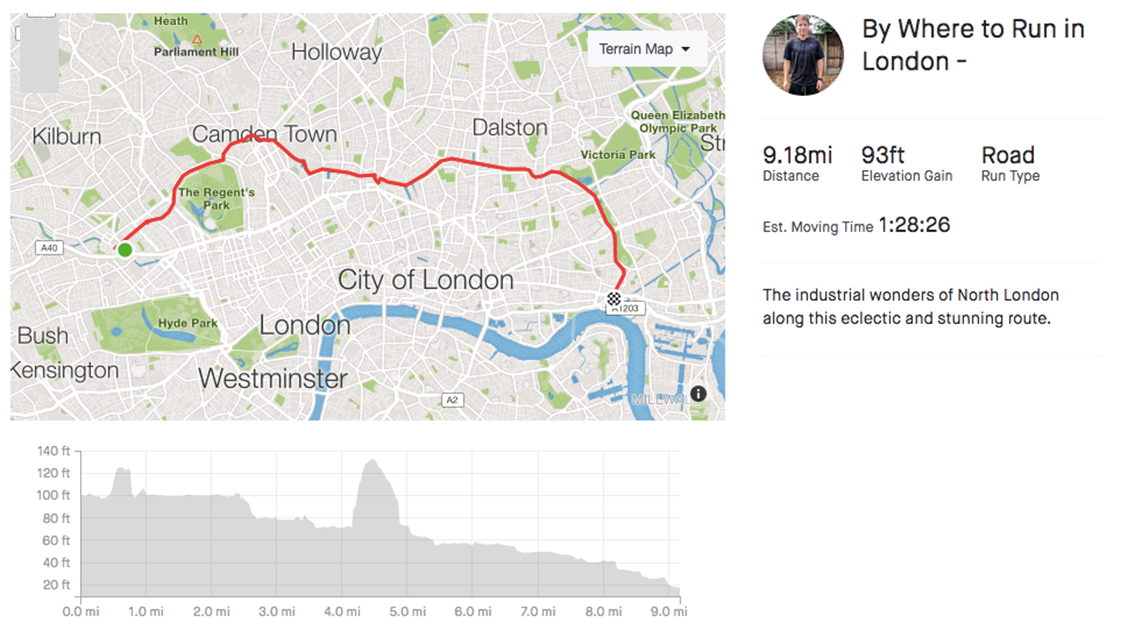 Named after the Prince Regent, later George IV, Regent’s Canal starts at Little Venice, near Paddington and ends at the River Thames at Limehouse basin in Docklands. See London’s industrial heyday and Victorian heritage now lined with colourful narrowboats and rich plant and wildlife. Mix it up and throw in a loop of Regents Park or Victoria Park.

This route is lined with open water, so if you don’t swim well, either give this route a miss or take it very carefully. The towpath is narrow and there will be other users (including cyclists) to pass. The surface can be slippery on a wet day. 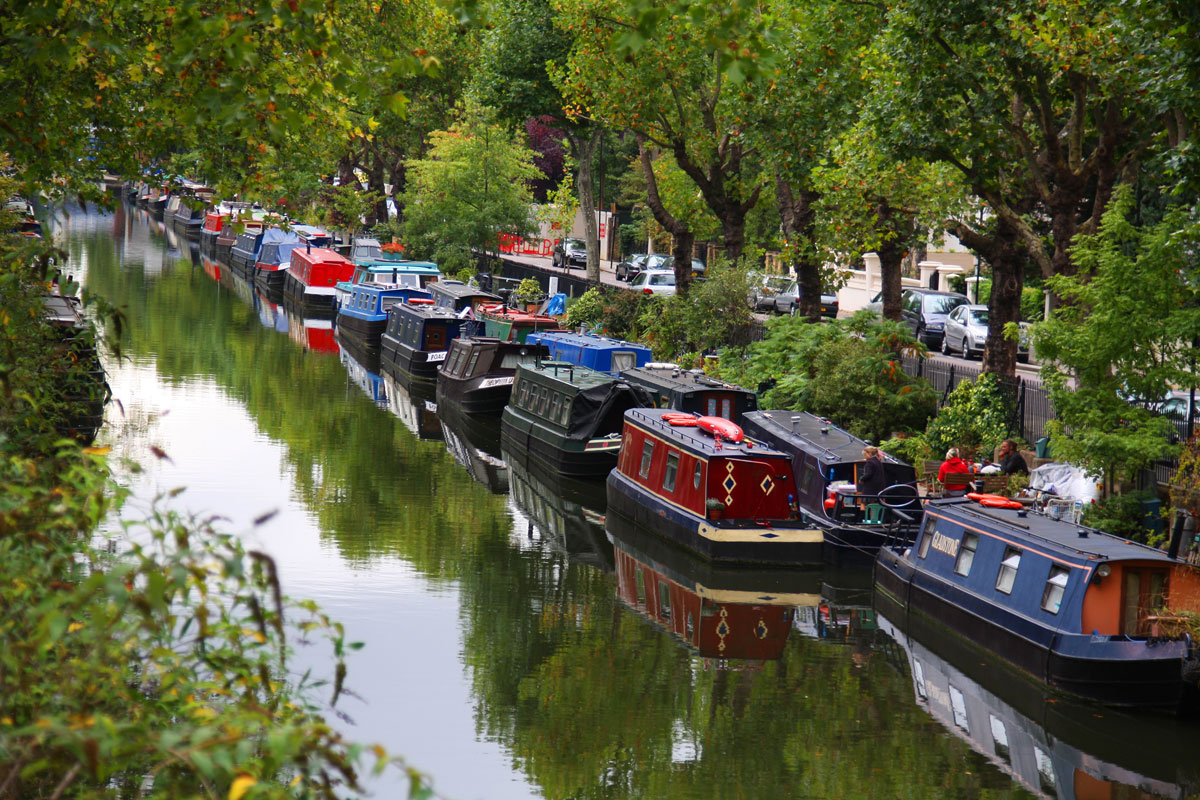 The route of Strava comes out at around 9 miles. The official length of the canal is 8.6 miles (13.8 km) long. There are a few points at which the exact route cannot be followed, and it’s also not possible to plot the most direct route on Strava.

The route can get very busy on a warm summers day. It’s best enjoyed earlier in the morning.

The route can be run either way, but this one goes from Paddington to Docklands. To get a long training run in, you can go out and back.

A shorter and simpler 4.3 mile route can be started from Colebrooke Row, Angel.

Make your way to the north side of the canal and follow eastwards until you come to Maida Vale Tunnel. Cross the A5 using the pedestrian crossing and follow along Aberdeen Place for approx.300 metres and join the canal again. Pass through Eyre’s Tunnel (50m) that has a footpath through the tunnel. 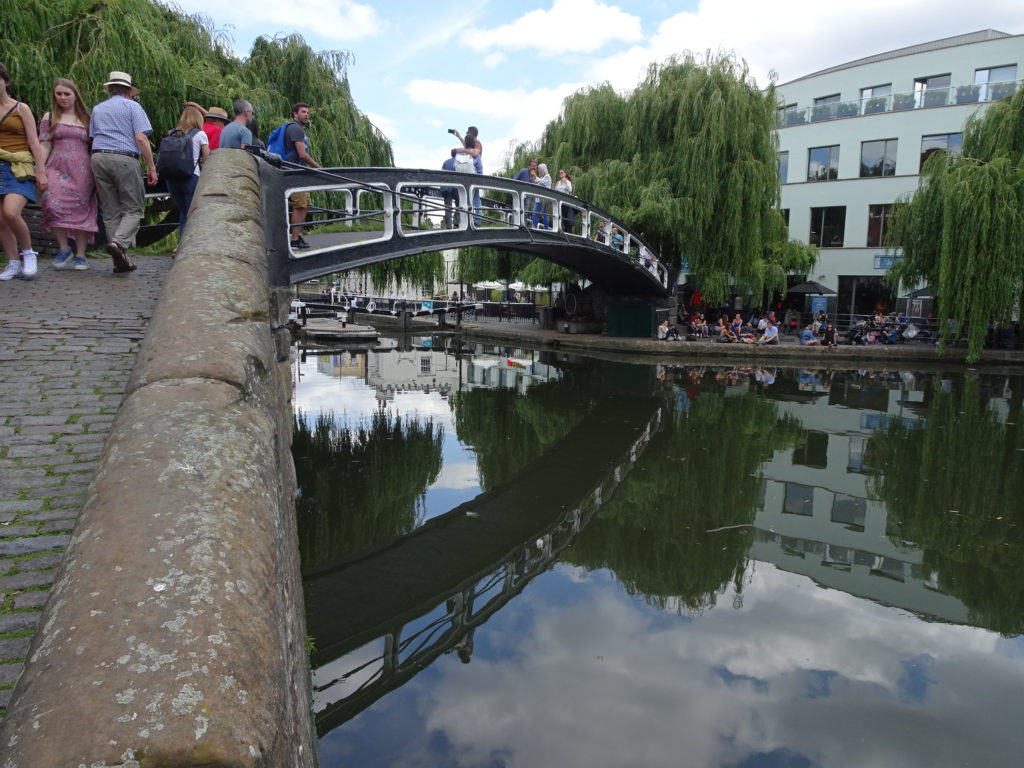 Follow the towpath with Regents Park on your right to Camden Lock. You can either stay on the north side of the canal and weave through the various eateries and bars of West Yard Street Food Market and pass under Camden High Street or take the footbridge (above) that sweeps over the canal. Cross back over at Camden High Street onto the towpath.

The Islington Canal Tunnel is 878 m long and passes underneath the Angel area of Islington. There is no pedestrian access through the tunnel.

Go up the ramp, cross Muriel Street follow straight on to the footpath and onto Maygood Street, turn right, and then left onto Tolpuddle Street. Upon reaching Liverpool Road, turn right. Cross the A1 (Upper Street) and turn left. Take the right onto Duncan Street that will drop you back at the canal at Colebrooke Row.

Add a screenshot of the route. 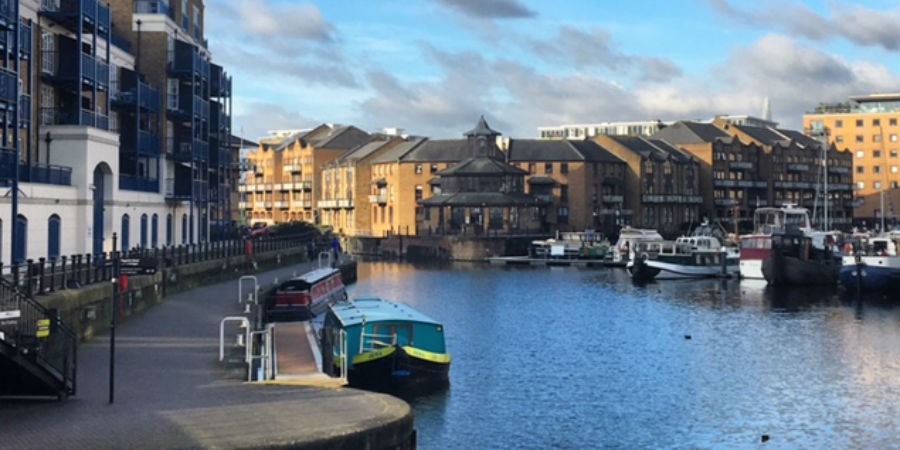 Follow the north side towpath eastwards to Victoria Park before sweeping southwards down towards the River Thames at Limehouse Basin (above).

The route is accessible 24 hours. It’s recommended not to run this route when it’s dark for safety reasons. 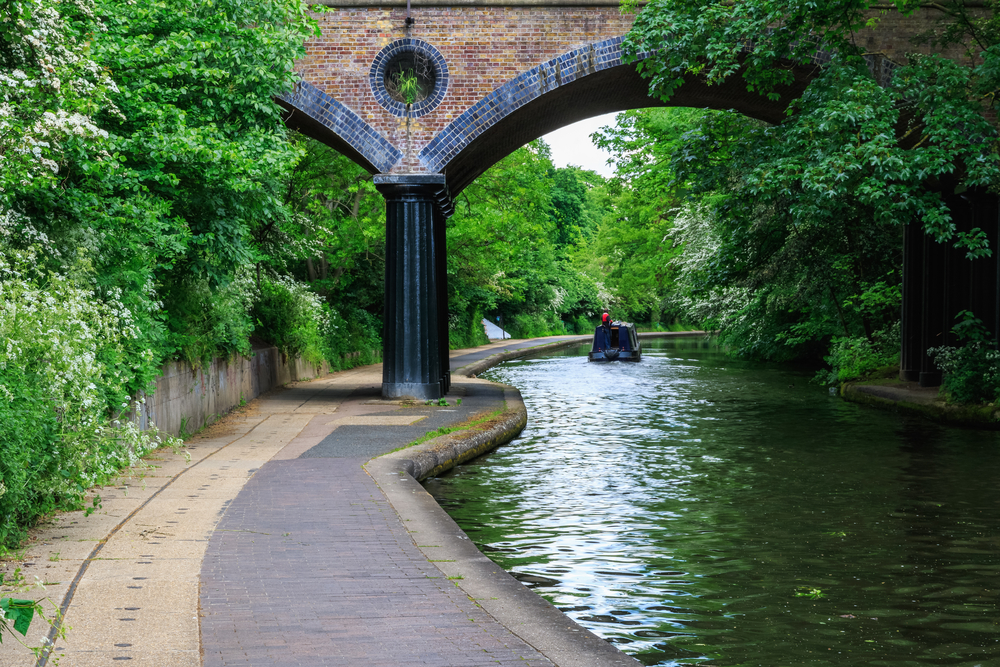 If you want to avoid the detour due to the Islington Canal Tunnel and run the shorter route, the nearest station to start/finish is Angel (Northern Line).

I could probably dedicate a whole website to the food and drink establishments along this route as it passes through many busy areas of North London including Paddington, Camden, Kings Cross and Angel areas. If you need a pick me up, en-route, you’ll not be short of options. See the Regent’s Park and Victoria Park pages for options in those areas.

There are many points of interest along the canal including park and historic buildings.

The Ragged School Museum – 46-50 Copperfield Rd, London E3 4RR – A former school opened by Thomas Barnardo in 1877 to serve the children of Mile End with a basic education. The museum now features a reconstructed Victorian classroom and a typical East End kitchen from 1900, as well as local and cultural history of the East End.